Tonight begins the seventh day of Pesach.  It’s a yontif  (Yom tov, a non-work holiday day), like the first day (or two) of Passover, and I invite you to light candles to mark the beginning of this ending.  Such markers of time are especially important for those of us whose days are blending into each other as we stay home and struggle to create structure for ourselves.  So notice that it’s the last day of Passover.

And if you are a Jew whose roots are in North Africa, you already know about Mimuna (Maimouna), a joyous community-wide celebration of the return to chometz-dikeh eating.  (OK. that’s a little too cross-cultural — an Ashkenazi pronunciation for a Sephardi celebration.)  One of my college professors, Dr. Joelle Bahloul, grew up in Morocco and from her I learned of the close collaboration between Jewish and Muslim neighbors in the celebration of Mimuna.  After all, how could you throw a party full of chametz (leavened/fermented food) starting immediately after sunset when you have had nary a crumb nor drop of it in your house for the past 8 days?  Only if your neighbors had ready for you to purchase, borrow, or “buy back” all that you would need!

Joyful Maimuna follows the last day of Pesach.  But the last day itself, whether 7th or 8th, is a solemn one.  It is one of four days on the Jewish calendar designated for Yizkor, the memorial service whose centerpiece is a prayer asking “May God remember” people who have died.  It concludes with El Maley Rachamim, a prayer asking “God, full of compassion” to shelter the souls of the departed beneath the wings of God’s presence, and then Kaddish.
This year, we have need for pausing and remembering at Yizkor.  It’s not that God needs a reminder. Nor, alas, do we.  But we need to remind ourselves to pause, to breathe in the sorrow, to breathe it back out. 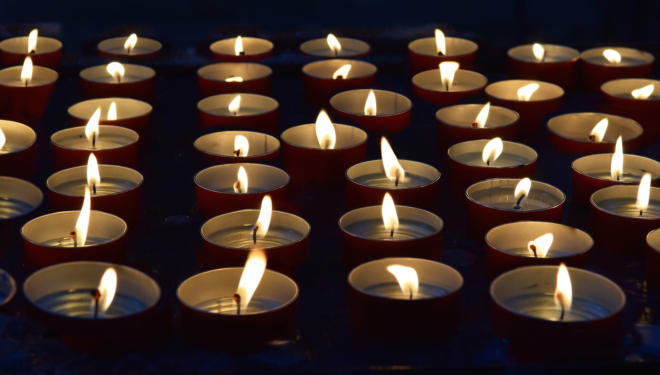 Yizkor is recited on days which traditionally would bring family to mind, Yom Kippur and the three major agricultural festivals: Pesach/Passover, Shavu’ot/“Weeks,” and Sukkot/“Booths.”  (Technically on Shmini Atseret, the holiday at the end of Sukkot.)  Here, at the end of Pesach 5780, family is very much on our minds, whether we have it or not.  Family with whom we are hunkered down at home, and family we can only see on a screen and speak to through the ether.  Family we will never see again in this world, and family who aren’t there to care for us if we get sick.

Originally, Yizkor was recited only on Yom Kippur. Its primary purpose was to honor the deceased by committing to giving tzedakah [charity] in their memory, on the theory that the good deeds of the survivors elevate the souls of the departed. It also enhanced the chances for personal atonement by doing a deed of lovingkindness. Since the Torah reading on the last day of the pilgrimage festivals [the holidays of Sukkot, Passover, and Shavuot] mentions the importance of donations, Yizkor was added to these holiday services as well.

It was the custom in medieval Germany for each community to read a list of its martyrs at the Yizkor service. The practice was eventually expanded to include the names of other members of the community who had died.  (MyJewishLearning.com)

We have many names to recite this year … and cannot.  As of this writing, the World Health Organization reports that 117,217 people have died worldwide from the novel coronavirus that causes COVID-19.  We know that this number is too low to accurately represent reality.  A bit closer to home for me, Hart Island in New York City is once again being used as a mass burial ground for people who died of COVID-19, whose bodies have remained unclaimed for two weeks.   Their names are preserved, but there is no grave marker for them.  Nor for the people who died of AIDS or so-called Spanish Flu nor any others buried there over 150 years.  Families who can afford a burial will be able to reclaim the bodies of their loved ones for reburial; but while there is no cost for the disinterment, funerals are expensive, and  “city burial assistance covers $900 for a funeral not costing more than $1,700.”  (A total cost which is almost impossible to find, and funeral directors are overwhelmed.   It is striking to me that these people are being buried in plain pine boxes, which is in accord with the simplicity required by Jewish tradition.  Photo.)

There will never be a complete accounting, and most names are unknown to anyone but the people who love them and the people who held their hands, if they could, as they died.  And, if so you believe, to God.

But our people have known mass death before.  There is a version of El Maley Rachamim for Jews who died in the Shoah (otherwise known at the Holocaust).  There are others as well, with the exact language changed depending on what tragedy has occurred.  For instance, this 2017 El Maleh Rachamim for Victims of Racial Violence.  Undoubtedly there were similar memorial prayers after the Black Death and the massacres of Jews at that time, who accused of causing it by poisoning wells.

If you have a yahrzeit candle, I invite you to light it tonight or tomorrow night (depending on whether you observe 7 or 8 days of Pesach) just before you light holiday candles.  Take a moment for your own meditation or a prayer, or just stand silent to honor the memories of uncounted thousands of our fellow human beings who have died in this pandemic.

!עֹשֶׂה שָׁלוֹם בִּמְרוֹמָיו, הוּא יַעֲשֶׂה שָׁלוֹם עָלֵֽינוּ וְעַל כָּל יִשְׂרָאֵל, וְעַל כָּל יוֹשְׁבֵי תֵבֵל, וְאִמְרוּ אָמֵן
Oseh shalom bimromav, hu ya’aseh shalom, aleynu
ve’al kol yisra’el,
ve’al kol yoshvey teyvel,
ve’imru: Amen!
May the One who makes peace in the heights, make peace for us,
for all Jews everywhere,
and for all the inhabitants of the planet,
and let us say: Amen!
« This is not a time for productivity. Not yet Yom HaShoah 5780/2020 »